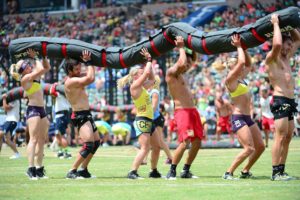 Draw back the curtain on the CrossFit Games and there are a few surprises behind the scenes. For all that it is now a professional sport, the reality is that sometimes Games athletes are a little more like the rest of us (actual humans!) than we imagine.

Check in day = Christmas day at the CrossFit Games

It’s where you get all the gear. They load you up with 6 pairs of shorts, 6 sports bras, too many t-shirts to count, compression wear, hats, headbands, socks, sweatbands and sweaters. And let’s not forget the shoes. At least 6 pairs of them all in the brightest shade possible of the year’s colour scheme. Mine came in fluorescent yellow so naturally they match with every outfit I could ever want to wear. Grown men and women with more muscles than you’ve ever seen become like children tearing the wrapping paper off gifts at Christmas time. It’s the only day of the Games where every single person is happy.

You’ve never been so happy to see an ice bath

After hundreds of squats, burpees, thrusters, muscle-ups and sprinting in the Californian midday heat, I’ve never been happier to see an ice bath. Stumbling off the field after events were finished I headed straight into the ice baths, clothes and all. And then I proceeded to wallow in it like it was the world’s greatest Jacuzzi filled with $100 a drop scented bubble bath.

All judges are not born equal…

…And the athletes definitely have their favourites (in fact favourite judges is a common discussion topic backstage). Athletes know that judges have a tough job. However, we still want the girl who is cheering for you to succeed as they count down your remaining reps, rather than the hard nosed guy who will no rep you for an elbow that doesn’t lock out by 2 degrees. CrossFit standards are judgement based so it goes without saying you want a cheerful judge.

Castro doesn’t have it all figured out

He may seem like the all-knowing director, but Castro isn’t really a detail kind of guy. The Open and Regionals – because they occur in all different locations – are planned down to crazy level of minutiae.  But attend an athlete briefing at the Games and Castro is literally making up answers on the spot in response to athlete questions about what will and won’t fly.

Tantrums and tears are the norm

The girls and guys of CrossFit are tough. They go through physical pain on a daily basis in order to push their limits. But backstage at the Games you see small cracks in that toughness as the emotional intensity of the weekend starts to affect athletes. Coaches bear the brunt of the tantrums and tears between events (and it’s not just the girls crying!)  Somehow they find a way to put a smile on their athlete’s face before they send them back out in front of the cameras and fans. I often think that being the coach of a Games competitor or team is just as tough as being out there on the floor – plenty of work but with none of the glory.

Super-human is an illusion

The Games athletes look super-human down on the field under lights, but by the final day they are covered in bruises, barbell scrapes, box jump wounds, rope burn, double-under welts and tape. Literally athlete’s bodies become a patchwork quilt of different tape colours and taping styles until they are wearing more tape than they are clothes. But every bruise is a badge of honour, and every ache or pain is a a hard-earned marker on their journey.

The grass is greener on the IN-side

There’s chocolate in the athlete’s lounge

For all the talk in the CrossFit community about Paleo, Macros and meal-prep, the reality is that athletes at the Games still love chocolate. The athletes lounge features a variety of healthy snacks like bananas, almonds and chicken. However, there is also a giant bowl of chocolate chips. Guess which bowl of snacks empties out the fastest?!

We look up to Games athletes as heroes of the sport. But every now and then it’s good to remember that they are just as human as us – they bruise, they cry, they love free stuff, they eat chocolate… and they wonder what Castro is thinking.